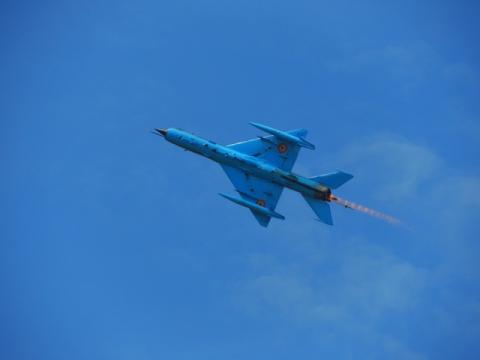 The pilot of the MIG 21 Lancer aircraft that crashed in Constanta County while executing landing maneuvers reported a major engine failure, as its operating parameters were deteriorating, the National Defence Ministry (MApN) reported in a press statement on Monday.

According to the source, the aircraft, piloted by Lieutenant Commander Adrian Stancu crashed around 11:15hrs, near the Mihail Kogalniceanu Airport, in the area of Nazarcea village, Constanta County, during the execution of landing maneuvers.

The pilot is conscious and ins a stable condition. He was given first aid at the scene and was flown to the Constanta County Hospital.

The aircraft, which belonged to the Lieutenant Aviator Gheorghe Mociornita 86th Air Force Base in Fetesti, took off around 10:00hrs from the Mihail Kogalniceanu Airport on a training mission under the "Thracian Eagle 2017" exercise carried out alongside the Bulgarian Air Force.

According to the procedures, the pilot catapulted and the aircraft crashed outside inhabited areas.

The case is being investigated by the Military Prosecutor's Office, according to legal procedures, and the circumstance of the accident will be investigated by a committee appointed by the General Chief of the Romanian Air Force Staff," the statement reads.