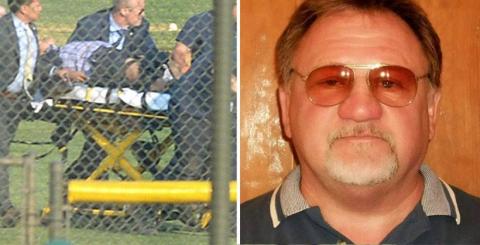 A gunman believed to be a supporter of former Democratic presidential candidate Bernie Sanders sprayed a hail of bullets at a GOP baseball practice Wednesday morning, injuring House Majority Whip Steve Scalise and four others before U.S. Capitol Police took down the rifle-wielding assailant. The shooter, who had a violent history including arrests for battery, resisting arrest and drunken driving, was identified as 66-year-old James T. Hodgkinson, of Illinois, Fox News confirmed. President Trump said Hodgkinson died from injuries sustained when he was shot by police.
“I have just been informed that the alleged shooter at the Republican baseball practice is someone who apparently volunteered on my presidential campaign,” Sanders said in a statement. “I am sickened by this despicable act. Let me be as clear as I can be. Violence of any kind is unacceptable in our society and I condemn this action in the strongest possible terms.”
President Trump addressed the nation before noon and revealed Hodgkinson died in police custody.
“Steve Scalise was shot and badly wounded and is now in stable condition at the hospital along with two very brave Capitol Police officers,” Trump said in a White House address. “At least two others were also wounded.”
Sanders released a statement condemning the shooting in “the strongest possible terms.” Here is Sanders’ complete statement.