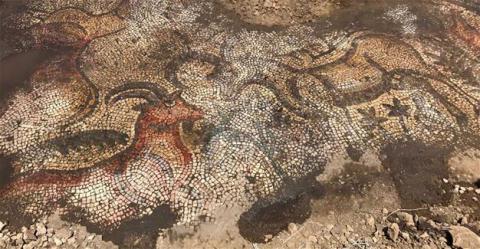 A mosaic structure dating back to the 4th century has been found in the Gölbaşı district of the eastern Turkish province of Adıyaman.

Two brothers who work locally as farmers discovered the mosaic structure, which features Ancient Roman characteristics, while they were working in their field in Gölbaşı.

They informed the local authorities about their finding, after which technical teams visited the field to make inspections.

Adıyaman is one of the most archeologically significant provinces in Turkey. Among its archeological sites are the caves of Perre, the fortresses at Gerger and Samsat, the "Cendere" Bridge, and Mount Nemrut, a ceremonial and burial tumulus for King Antiochus I of the Kommagene kingdom.