Top 10 Places to Visit in Plovdiv 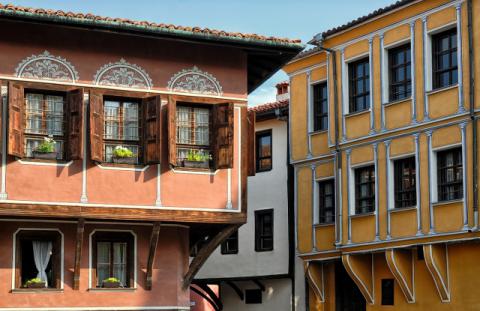 The Ancient theatre of Philipoppol is one of the best-preserved ancient theatres in the World. It is located on the Southern slope of the Three Hills, in the saddle between Taksim and Dzhambaz tepe. Discovered by archaeologists from Plovdiv and reconstructed in the beginning of the 80s of XX century, the Ancient theatre of Philipoppol is among the most significant findings from the Roman period. Recently found and deciphered inscription on a monumental pedestal reveals that the theatre has been constructed in the 90s of I century A.D., when Philippolol was under the rulership of Titus Flavius Cotis - an heir of a Thracian Royal Dynasty, the high priest of the Tracian province, representative of the Metropolitan Court of Justice and a person in charge of the construction sites.

The open-air spectator's area includes 28 concentric rows of marble seats, surrounding the stage- orchestra, which has the shape of a horseshoe with diameter 26.64 m. Apart from theatre performances, the venue was used for gladiatorial and hunting games, as well as a seat of the General Assembly of the Roman province of Thrace (Tracon koinon). It was in use until the end of IV century and had a capacity of about 6 000 spectators. There used to a lodge for the Emperor and other officials on the second row of seats above the archway.

Nowadays, the Ancient theatre is symbolical for Plovdiv and adjusted to the city's modern cultural life. It is operating as a stage of opera, music and drama.  Some of the best annual events are the International Folklore Festival, the Opera Festival "Opera Open", the Rock Festival "Sounds of Ages" and many others.

“Trend”: 40% of Bulgarians Believe that COVID-19 Is Biological Weapon