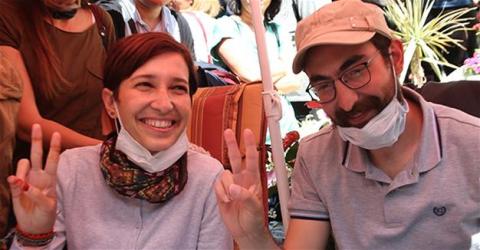 The Constitutional Court on June 28 denied the demand of jailed educators Nuriye Gülmen and Semih Özakça to be released from prison. The two have been on hunger strike for over 100 days in protest at their dismissal from their posts in state of emergency decrees, and were arrested at the end of May.

The Constitutional Court reportedly voted unanimously to reject the release request vote, stating that prison conditions did not constitute a threat to Gülmen and Özakça's health situations.

"Taking into consideration the applicants' complaints regarding their health situations, the court has concluded that they have been transferred to health institutions. Because there is a state hospital in the prison, the fact that the applicants - for whom health services are being provided - are being kept in the prison does not constitute a threat to their life, material, and spiritual integrity," the court ruled.

The court also emphasized the importance of necessary precautions being taken by the jail for the physical health of Gülmen and Özakça as part of its obligation for protection of the right to life.

Nuriye Gülmen, an academic, and Semih Özakça, a primary school teacher, were arrested on terror charges late on May 23, the 75th day of their hunger strike. They have been continuing their hunger strikes in jail, but their health situations are reported to be deteriorating severely, with doctors indicating that they are at risk of death at any time.