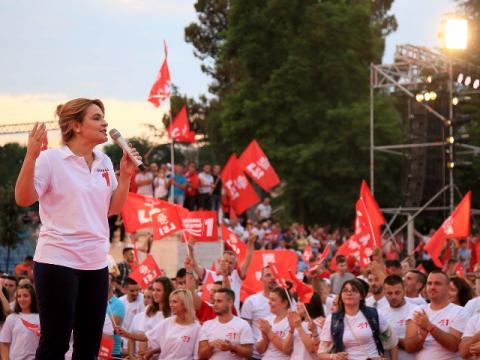 The fallout from the June 25 election in Albania - which Edi Rama's Socialists won - continues to reverberate, as the head of the third-placed party, the Socialist Movement for Integration, LSI, Petrit Vasil, resigned on Thursday, proposing Monika Kryemadhi as his successor.

An experienced politician, she is currently an MP and vice-chair of the LSI, while also being the wife of the longtime leader of the party, Albania's President-elect, Ilir Meta.

The move came two days after the LSI gained a good result in the election - but lost its traditional role as coalition kingmaker and went into opposition.

"The chairmanship of the party has decided on reorganization … to give the country a real opposition, not a captive one, as it had up to now," Vasili said.

"In accordance with this … new dynamic, I propose Monika Kryemadhi [as chair] not only for her [existing] position as vice chair of the party but also for her extraordinary political qualities," he said.

Kryemadhi, 43, started her political career in 1991 in the Socialist Party's youth forum. She became a Socialist MP in 2001 but in 2004 she split with the Socialists and joined her husband, Ilir Meta, in his new party, the LSI.

The resignation of Petrit Vasili was seen as a surprise as he was only elected party chairman on May 3, after being part of the LSI for 13 years, since its creation in 2004.

In the past eight years, besides holding ministerial positions, he was vice-mayor of Tirana when the municipality was headed by the current leader of the centre-right Democratic Party, Lulzim Basha.

Vasili replaced the historic leader of LSI, Ilir Meta, after...