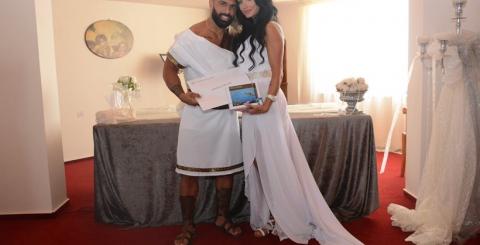 A “mortal Spartan” and a “Greek Goddess” were married today at the Ayia Napa City Hall in Cyprus. No they are not reincarnations of Leonidas and Aphrodite. Richard and Roxanne are from Lebanon (both of whom have Greek roots) decided to marry in Cyprus, which is the closest Greek destination from their country. The two tied the knot at the Agia Napa municipal hall. The city council issued a statement saying “the groom is of Greek descent from his father while the bride from her mother”. The couple expressed their hope that the Goddess of Love, Aphrodite would protect their union.

The newlyweds explained the reasons that led them to chose ancient Greek attires on their wedding day was the fact that Greece was a country with a great history of love, beauty and strength and that they were married on the island Aphrodite, the goddess of beauty.