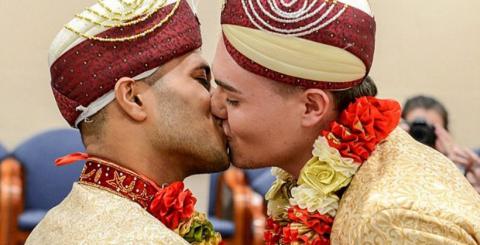 A couple who had one of the UK’s first same-sex marriages involving a Muslim partner have received online abuse after their wedding.
Jahed Choudhury and Sean Rogan married last week in Walsall, in the West Midlands.
Footage from the ceremony showed the couple dressed in traditional Bangladeshi attire as they said their vows at the town’s registry office.
But since their marriage, they have been targeted by hundreds of messages of abuse online, some from fellow Muslims.
Pink News reported on comments posted on a video of the pair by BBC Midlands, in which one commentator wrote: “You Can’t Be A Gay Muslim, If You Are Than Your Not A Muslim.
“Islam Forbids This, I’m not saying they should Split up and Be Straight Which is the right thing to do, what I’m saying is they can’t be Muslim If they are Gay.”
Another added: “It’s like eating meat and calling myself a vegetarian you are not Muslims.”
Several similar messages were posted after The Independentshared the couple’s story on social media.
One commenter said “Islam doesn’t accept this” while another wrote: “Just putting asian costumes doesn’t make it a Muslim marriage, there is no concept of gay marriage in Islam.”
Another said: “They are not Muslims, we don’t have gays and lesbians.”
Mr Choudhury, 24, was previously bullied at school, attacked by other Muslims and banned from his local mosque.
He attempted to change his sexual orientation and went on religious pilgrimages to Saudi Arabia and Bangladesh, but became suicidal and attempted to kill himself before meeting Mr Rogan.
The couple started living together in 2015 and Mr Choudhury proposed on his husband’s birthday last year.