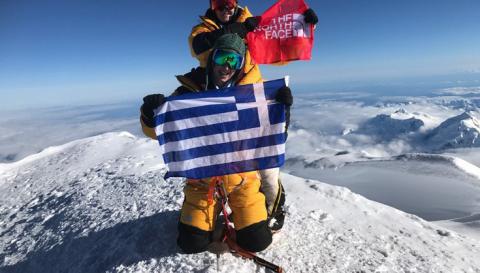 Christina Flamboura (member of the Hellenic Mountaineering Association of Acharnes) and Vanessa Archontidou (member of the Athens Mountaineering Clubs) became the first Greek women to set foot on the highest peak of Mount Denali in Alaska.
“The mountain does not want strength, it wants soul,” Christina Flamboura told Athens News Agency (AMNA).
The two climbers managed to nail the Greek flag on July 4th at one of the world’s 7 highest peaks in one of the toughest mountains in the world due to extremely low temperatures and technical difficulties.

Armed with her love of climbing, but importantly her will to succeed, 29-year-old Christina overcame her fears of heights and accomplished the strenuous feat. “No matter how strange it sounds, it all started because I was afraid of heights, and in my first attempt to climb, I had messed it up. Then I decided not to give up. For three years I have been involved with mountain climbing but not professionally. I am a private employee while studying for my second degree in Business Administration. You need to have perseverance, love for what you do, work and have discipline to prepare. And of course, you make sacrifices and save money”, she said.

Despite facing a setback through a serious injury 3 months before the climb was scheduled to start, Christina did not desert her dream. “In ranking Denali is one of the 7 highest peaks in each continent and is in the same category in terms of difficulty with Everest. It is the highest mountain in North America. It’s not the 6,200 meters that make it tough, but rather the technical difficulties. The climber is required to carry both their personal and crew equipment. We were wearing over 40kg and I was only 55kg. So I think it is the first obstacle for women who decide not to go or not or fail to manage and give up at the outset of their efforts”, she says.
But she drew strength to go on from her desire. “Despite the difficulties we encountered, I did not even think of giving up. Of course, there were some “traps” we had to avoid. We had a driver who helped us to avoid possible avalanches, but also the cracks, that is voids, holes created in the glacier. Once we were surrounded by cracks, we could not make a step, some of the team fell into the gap and were injured but fortunately not seriously. At those times I thought I was part of a movie, as if I wasn’t really living it”.
As for the … taste she is left with regard. On the one hand satisfaction and joy and on the other hand the disappointment that “women do not dare, they do not move forward, they do not choose to take one step further. It is 2017, and two Greek women set foot on this mountain. Because of the crisis, some stop daring. But our dreams must be pursued. ”