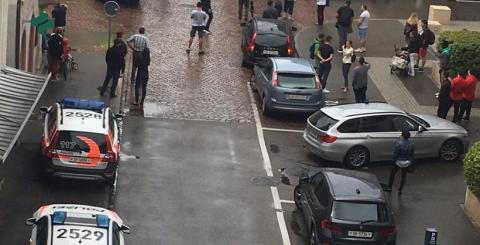 Five people have been injured, two seriously, in an apparent chainsaw attack in Schaffhausen, Switzerland.
Police have sealed off streets and shoppers are barricading themselves inside businesses at the historic town, which is popular with tourists.
The attacker is believed to have used a chainsaw during the rampage.
One witness said: “A man with a chain saw is supposed to be on the road.”
Police refused to confirm or rule out the use of a chainsaw during a hastily-organised press conference.
An elderly man suffering serious head injuries is among those injured in the attack.
Another witness said police had now “completely sealed off the old town”.
A major manhunt is now underway for the male suspect. Police have urged people to avoid the area until the operation is completed.
One shop owner said a customer was injured in the attack the town, located near the German border.
He added: “Nobody can leave the stores anymore.”
Another shop owner said: “It’s weird that something like this happens in Schaffhausen.”
Officers said they are dealing with a “special situation”. Police helicopters are now at the scene.

15 of the most stereotypical maps of Europe (maps)