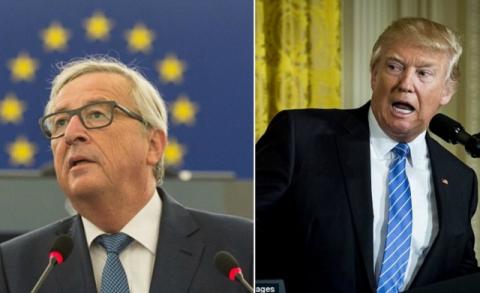 EU commissioner Jean-Claude Juncker called for an urgent debate on Brussels's response if European companies are affected by US anti-Russian sanctions. The announcement is made by the Financial Times, cited by TASS.

The paper had a document prepared for the European Commission meeting on July 26th. The document notes that Brussels must "be ready to act in the coming days" if the US takes action "without taking into account the EU's concerns". The document provides the EC with a "public or written assurance" from the White House that Washington will not introduce sanctions in a way that affects the interests of the EU, he added.

Yesterday, it was reported that US President Donald Trump supported the bill on introducing new sanctions against Russia, Iran and North Korea. White House new spokesperson Sarah Sanders said that "Washington is in favor of a firmer stance against Russia, especially with regard to the introduction of these sanctions." The text of the original version of the bill was bad, but we worked with the House of Representatives and The Senate is pleased that the necessary changes have been made and supported, "added Sanders.

On July 22, the press service of the Republican Party leader in the House of Representatives Kevin McCarthy confirmed that the vote on the bill will be held on July 25th. The US Political News reported that the deadlock has already been resolved with this initiative. According to the newspaper, ultimately, the restrictions initially included against Iran will also include sanctions against North Korea, as proposed earlier by McCarthy. It is expected Tuesday that most of the US Congress House will support this document.