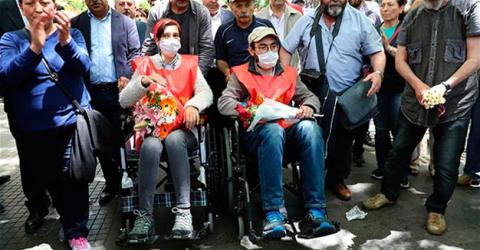 Imprisoned educators Nuriye Gülmen and Semih Özakça received medical check-ups in an Ankara hospital on the 140th day of their hunger strikes at the request of the European Court of Human Rights (ECHR), daily Cumhuriyet reported on July 26.

Gülmen and Özakça were examined at Ankara's Numune Training and Research Hospital on July 26 before their health reports were sent to the Forensic Medicine Institute.

"This is a protest and they are not waiting to die, this is a not a suicide. In situations where people believe there is no other way to make themselves heard, [they resort to] a protest method. In long-lasting hunger strikes, there can be risks of brain damage. Their consciousness remains open for a long time, but there will be difficulties," Şebnem Korur Finacı, a forensic science expert, reportedly said.

Literature professor Gülmen, 35, and primary school teacher Özakça, 28, had begun their hunger strikes after losing their jobs with state of emergency decrees. They were arrested on terror charges late on May 23, the 75th day of their hunger strike.

The educators then filed an application to the Constitutional Court to be released from prison, but the top court voted unanimously to reject their demand, prompting the educators to take it to the ECHR.

Meanwhile, members of the Communist Party of Turkey (TKP) held a protest in front of the parliament building in Ankara for the educators on July 26, daily Cumhuriyet reported. Police detained 16 members of the party, which made a statement saying, "We are warning the government. You would be going under a wrong doing if something happened to Nuriye and Gülmen. This is a work and dignity war. Reinstate every laborer, first them and then everyone dismissed unlawfully, to...