Erdoğan, Yıldırım to join 946th anniversary of Battle of Manzikert 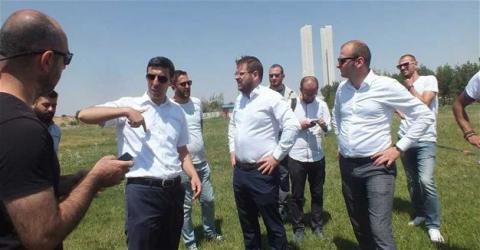 A major celebration will be held in the Malazgirt district of the eastern province of Muş on Aug. 26 to mark the 946th anniversary of the Battle of Manzikert ("Malazgirt" in Turkish), the victory of Seljuk Sultan Alparslan against the Byzantine Empire in 1071, with the participation of President Recep Tayyip Erdoğan and Prime Minister Binali Yıldırım.

Erdoğan and Yıldırım are expected to visit the 1071 Victory Monument erected on the side of the former battle field at the western entrance of Malazgirt. The statue depicts Seljuk Sultan Alparaslan on a rearing stallion, with an inscription on the pedestal plaque claiming that Alparslan had only 15,000 men and the Byzantines had over 200,000 fighters.

Erdoğan had heralded the celebration on Aug. 8 during a gathering with the local executives of the ruling Justice and Development Party (AKP) in the Black sea province of Trabzon.

"On Aug. 26, I will hopefully be in Malazgirt, in the place where our ancestors wrote history. We, as their inheritors, will start to commemorate Aug. 26 every year, like we do for the Gallipoli victory. Because we have set goals for 2023, 2053, and 2071, we need to start initiating these right away," he said.

The Battle of Manzikert took place in 1071 between the Byzantine and Seljuk empires for control of eastern Anatolia. In the battle, Alparslan defeated Romanius IV Diogenes, taking him prisoner but later releasing him.