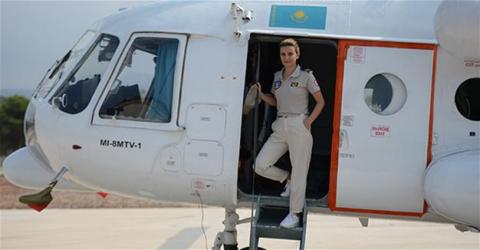 After a short period of work experience in a private air company, the 27-year-old Dinçer this year started working as a fire extinguishing helicopter pilot at a department within the Forestry Ministry, assigned to the Mediterranean province of Antalya.

Her flight control skills soon earned the appreciation of the ministry and her fellow team members, with colleagues and family members giving her the nickname "Fire Eagle."

Dinçer grew up in a house near Ankara's Esenboğa Airport, which is how she believes she got a passion for flying. After watching airplanes taking off and landing at the airport from her home's window, she once told her parents that she would one day become a pilot.

She graduated from Anadolu University in the western province of Eskişehir, after which she received two-and-a-half years of training at a civil aviation school.

"The struggle against fires has always attracted my attention. Everyone was surprised when I started this job … But everyone gave me support. After taking on a number of duties over time, I have shown that this is also an appropriate job for women," she said.

"In every person there should be a passion and they should work for that passion. I want to be an example for young girls. They may face unfavorable situations but they should never give up. They should be active. For a woman to be successful, she has to be very powerful. Not in physical terms but psychologically. If a woman has self-confidence there is nothing she cannot accomplish," Dinçer added.

"This is really a sacred job. There...