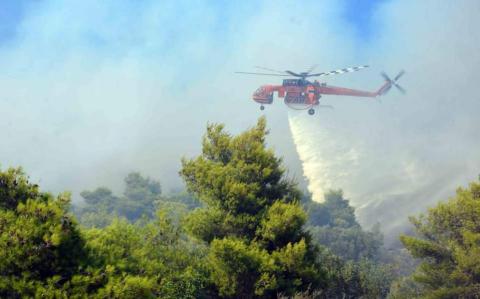 A large fire that broke out on Sunday afternoon near Grammatriko, northeast of Athens, continued to burn on Monday, testing the efforts of firefighters who resumed their efforts to extinguish it in the early hours.

The fire was close to residential areas in Grammatiko and neighboring Kalamos and Varnavas, eastern Attica.

The constant changes of wind direction was taxing the efforts of firefighters, a spokesperson for the fire service, Stavroula Malliri, told Kathimerini.

The head of the community of Varnavas, Haralambia Asimakopoulou, told Skai early on Monday that she had asked the fire service to dispatch more water-dropping aircraft to the area. "We are scared that whatever we managed to save last night will just be burned today," she said, stressing the size of the blaze.

A total of 150 firefighters were working in the area early on Monday, manning 68...