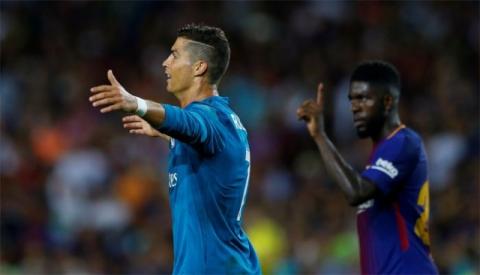 Cristiano Ronaldo has been penalized for 5 games for his actions in the Spanish Super Cup game in which Real (M) won 3:1 against Barcelona as guest of Camp Nou in the first leg. The Portuguese was sent off after receiving two yellow cards. The first was because he stripped for his goal for 2-1 in the 80th minute. He raised his shirt in front of Barca's audience, similar to Lionel Messi, who did the same at Bernabeu last season. Just a minute later, Ronaldo received a second yellow card for  simulation as he fell into the penalty area after a clash with Samuel Umtiti. Angry at the decision, Ronaldo pushed slightly the referee Judge Ricardo de Burgos.

Under the rules of the Spanish Federation this bears a penalty of 4 to 12 matches. Eventually, the Disciplinary Committee imposed a sanction of 5 matches - one for the second yellow card and another 4 for the push.

Ronaldo entered as substitute in the match in which Real took a solid advance before the rematch in Madrid. The Royal Club led by Gérard Pique's own goal. Lionel Messi equalized after a controversial penalty in the 77th minute. Ronaldo scored for 2: 1, and Marko Asensio scored 3:1 at the end. Barcelona should score three goals in Madrid on Thursday to have a chance at winning the trophy.

Real Madrid coach Zinedine Zidane was pleased with the team's performance but not with Ronaldo's red card: "We played a great game, but what annoyed me was the expulsion of Cristiano, maybe not a penalty but a second yellow card was a bit too much, we can't change what happened."

Barca's new coach Ernesto Valverde, for whom it was an official debut, thinks the result lies: "I do not think they are as far ahead of us as this result shows." They scored 3 goals, but we had a chance to score even more . "...