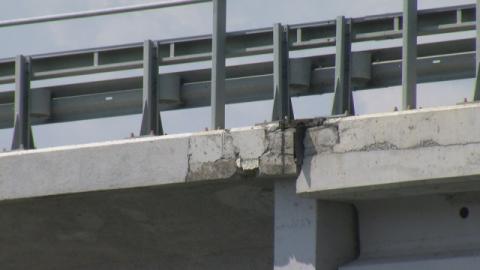 The bridge at the Petrich village of Ribnik, which runs the traffic to Petrich and Macedonia, is dangerous, say locals. The facility, which collapsed five years ago and was rebuilt, has serious cracks and the foundation has been compromised.

In 2012, the bridge collapsed along with a man and his car - fortunately the man survived in the stormy waters of Struma.
Eight years later, the newly built facility is dangerous, say spectators.

Every day, dozens of buses and hundreds of cars pass. "You have to be blind not to see that there is a huge crack," says the driver of a bus Iliya Atanasov.

The baton built to protect the bridge's columns from washing was destroyed and the flooring has long been uneven. Drivers complain that the road is narrow - two heavy trucks have trouble passing.