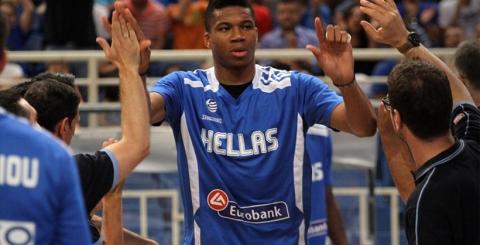 The dispute between the Greek Basketball Federation and the NBA and Milwaukee Bucks over the health of Giannis Antetokounmpo continued after the NBA denied there was an organised plan to prevent then Greek Freak from taking part with the national Greek team in the European Championships. “The NBA and the Milwaukee Bucks have followed all appropriate protocol under the NBA-FIBA agreement. Giannis has an injury that has been confirmed through multiple examinations and any suggestion to the contrary is false”, the NBA said in a statement.

Greece’s basketball federation accused the Milwaukee Bucks and the NBA of hatching a plan to prevent Giannis Antetokounmpo on Saturday from playing in the European championship.
About an hour after Antetokounmpo posted on Facebook and Instagram that he was unavailable because of a knee injury, the federation attacked the Bucks and the NBA in a statement, describing an “organised and well-staged plan” to keep Antetokounmpo from playing in the Eurobasket at the end of the month.

“The simultaneous report by the Milwaukee Bucks and Giannis Antetokounmpo himself, by phone and social media from faraway China, and not by the appropriate official manner, of his inability to join the national men’s team saddens us … but is not surprising,” the federation said in the statement.

“A series of indications … had convinced us of the existence of an organized and well-staged plan by (Antentokounmpo’s NBA) team, with the full knowledge if not encouragement of the NBA that put the athlete on the spot and forced him to announce today that he is no longer part of the men’s national team.”
The federation also said that all details of the story would soon become known.
Takis Tsagronis, the federation general secretary, told state TV ERT that a scan revealed no problems with Antetokounmpo’s knee.

“This (the player’s absence) is bad but not unexpected news. All indications were that it would end up like that,” Tsagronis said.
“We, on our side, did everything not to give the Bucks an excuse. We took a magnetic scan of Giannis’ leg and it was clean. What the Bucks claim is not the reality; something else is happening.”
In his Facebook post, Antetokounmpo said he failed to complete physicals because of excessive pain. Antetokounmpo is in China to attend, but not play in, a basketball tournament in Shanghai, as an NBA ambassador.
He was to have rejoined Greece after his China tour to prepare for the Eurobasket starting on Aug. 31, but his knee problems, which forced him to miss all but one of Greece’s warm-up games, alarmed the Bucks, who administered the physical in China.
“It is by far the biggest disappointment in my career,” Antetokounmpo posted, in Greek. “I must deal with the problem. Last year, I could `freeze’ the deal on my new extension contract. This year, I have no choice.”
As if anticipating the questions over his absence, Antetokounmpo added: “I ask everyone not to make of my absence more than it already is, and focus instead on the guys who will fight at the Eurobasket for a success that has eluded us for years.”
Antetokounmpo’s new four-year, $100 million contract with the Bucks begins in September.
Last season in the NBA, he finished in the top-20 in total points, rebounds, assists, steals, and blocks.