Serbia Withdrew All Its Diplomats From Skopje 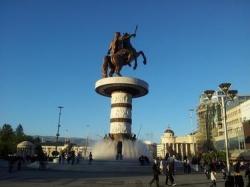 Serbia has withdrawn all of its embassy staff in Skopje. There is currently no employee in the building, according to BGNES. Macedonian Foreign Ministry officials said they "received a note from the Serbian diplomatic mission that said staff were called for consultations in Belgrade." They said that they "are not aware of the reasons for this decision and are currently in communication with the Foreign Ministry of the Republic of Serbia in order to ascertain the reasons for this decision."

"According to the Vienna Convention, the institutions of the Republic of Macedonia take all necessary measures to protect the security of the Embassy of the Republic of Serbia in Skopje," the Macedonian MFA said. Serbian ambassador Dusanka Divik-Tomic sent SMS to Serbian journalists, stating that "he can not comment on the case and recommends that they call the Belgrade Foreign Ministry today." According to the Serbian state agency, "today Foreign Minister Ivica Dacic will report the reasons for the departure of Skopje diplomats."

Novinite reminds that there has been a great deal of tension between the two countries since the Serbian representative of the special services at their embassy in Skopje Goran Jivalevich invaded the Macedonian Parliament during the "Bloody Thursday" on 27 April. More than 100 people were beaten. Among them are the current Prime Minister Zoran Zaev. Immediately afterwards, Goran Jivalevich left Macedonia, and Ambassador Dusanka Divik-Tomic was summoned to the Macedonian Foreign Ministry.

Last month, Ivica Dacic described "an error the recognition of the Republic of Macedonia under its constitutional name by the authorities in Belgrade." The statement was made during his visit to Athens.

A secret report of the Macedonian...