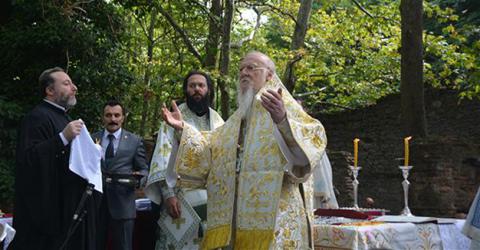 Fener GreekOrthodox Patriarch Bartholomew conducted a religious ceremony in the northwestern Turkish resort town of Erdek on Aug. 23, with the participation of locals and some 250 visitors from the Greek island of Chios.

In remarks at the event at the Kirazlı Manastır, a now demolished Greek monastery built in 1895, Bartholomew also celebrated the upcoming Eid al-Adha of Muslims and called for peace across the world.

"You honored the ceremony today, praying with us," said Bartholomew, addressing Muslim participants of the event.

"May God accept your prays. I wish you a Happy Feast of Sacrifice. May almighty God bless all the world and our Turkey with peace. Thank you all. Thank you very much for coming," he added.

Only the façade of the monastery, which used to have 99 rooms and is located in the village of Ballıpınar in Erdek, is still standing today, so the ceremony was held in its courtyard.

Erdek Mayor Hüseyin Sarı said participation in the event, held for a third consecutive year, was increasing each year.

The entire Kapıdağ Peninsula, where Erdek is located, hosts many important relics for the Orthodox world, he added.

Greek Consul General to İzmir Argyro Papoulia and Argiro Papulia, a lawmaker from Greece's ruling Syriza party, were also present at the eve