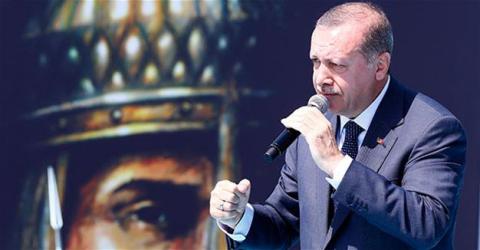 President Recep Tayyip Erdoğan has marked the 946th anniversary of the Battle of Malazgirt, the victory of Seljuk Sultan Alparslan against the Byzantine Empire on Aug. 26, 1071, in the Malazgirt district of the eastern province of Muş.

Erdoğan gave a speech to mark the battle, which opened Anatolia to Turks, in the area that also features the 1071 Victory Monument.

"We are proud of our ancestors who walked with glory, honor and victory until the middle of Europe after entering Anatolia from Malazgirt with the red flag on one hand and the green sanjak on the other," Erdoğan told the cheering crowds on Aug. 26, as he added that Sultan Alparslan made Anatolia "eternal homeland" via gaining victory.

Erdoğan said that Sultan Alparslan went in front of his army before the battle and told them "if I become a martyr, then this white dress would be my burial robe. If we win, the future is ours."

During his speech, Erdoğan praised Turkish people for standing up "against the enemies" in many attacks, including the July 15, 2016, failed coup attempt, widely believed to have been masterminded by the followers of the U.S.-based Islamic preacher Fethullah Gülen.

"Turkish people never gave up their dignity and independence even in the face of the risk of being martyred. That's why we should never forget Malazgirt, the starting point of our story in Anatolia. Those who don't learn from history are obliged to go through it again. Unfortunately, the Battle of Malazgirt was neglected for a long time in our country. Even though those who governed the state forgot about Malazgirt, the people didn't. We called on people and the people are in...