Terror groups are the pawns of powers against Turkey: Erdoğan 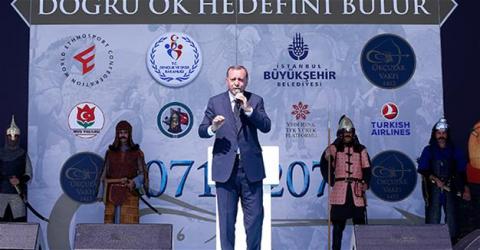 Terrorist groups in both Turkey and abroad are being used as "pawns" by power who "have set their eyes" on the country, President Recep Tayyip Erdoğan said on Aug. 26 in the Malazgirt district of the eastern province of Muş.

"[The Fethullahist Terrorist Organization] FETÖ is a pawn in this game. The [Kurdistan Workers' Party] PKK, the [Syrian Kurdish People's Protection Units] YPG, the [Democratic Union Party] PYD, the [Islamic State of Iraq and the Levant, ISIL] DAESH, and other terror organizations are all pawns. Each of them is a tool used by powers that have their eyes on our nation. Our struggle is not only against these tools, it is primarily against those who use these tools," Erdoğan said at a ceremony to mark the 946th anniversary of the Battle of Malazgirt, the victory of Seljuk Sultan Alparslan against the Byzantine Empire on Aug. 26, 1071.

During the speech, he vowed to end terrorism in the country by following in the footsteps of Turkey's ancestors.

"We will continue our struggle until terrorism ends. Nobody has the right to disturb our nation," he said.
"Just like [Turkey's vision for] 2023 and 2053, we've also determined 2071 [marking the 1,000th anniversary of the Battle of Malazgirt] as a 'horizon line,'" Erdoğan said.

Addressing thousands of people, he called on people to "better understand the meaning" of historic event like the Malazgirt victory, which is seen as opening Anatolia to Turkish settlement.

"We are proud of our ancestors who walked with glory, honor and victory into the center of Europe after entering Anatolia from Malazgirt, with the red flag in one hand and the green sanjak in the other," Erdoğan said, referring to the Turkish flag and the standard of Islam....