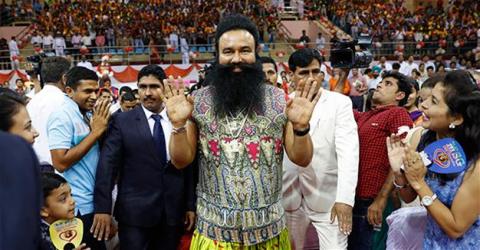 An Indian judge sentenced a self-styled "godman," whose followers went on a deadly rampage after he was convicted of rape last week, to 10 years' jail yesterday.

There were no reports of violence after Gurmeet Ram Rahim Singh was sentenced. Ten of thousands of police enforced a lockdown in large parts of the northern states of Haryana and Punjab where Singh, 50, has a mass following.

Police in Haryana issued orders to shoot protesters on sight ahead of the sentencing and ordered the hearing to be carried out inside the prison where Singh was being held. Hundreds of followers went on the rampage when he was convicted on Aug 25, attacking train stations, buses and television vans.

At least 38 people were killed and more than 200 injured, triggering criticism that Prime Minister Narendra Modi's ruling party, which also governs the state of Haryana, was either unable or unwilling to act against Singh's followers.

"The court has ordered 10-year jail term for the accused," Ram Niwas, a bureaucrat in charge of law and order in Haryana, told Reuters.

The case dates back to 2002 when two women followers accused Singh of rape at the headquarters of his Dera Sacha Sauda in the town of Sirsa. Singh, also known as the guru of bling for the bejewelled costumes he wears in selfproduced films, faced a minimum of seven years under new tough rape laws. Singh's lawyer, A.K.Panth, said his client was innocent and would appeal against his conviction.