Fernando Alonso: The Formula 1 super star of Incognito in Mykonos 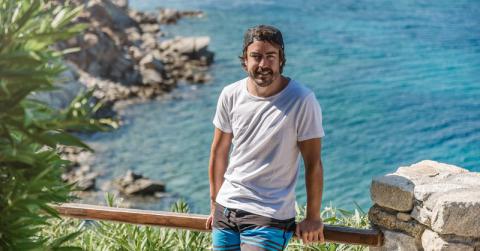 The F1 World Champion Fernando Alonso spent a week in Mykonos along with his stunning Italian companion and opened the door of his villa only to the “Proto Thema”.

The Spaniard Fernando Alonso rested during his vacations at the “Agios Lazaros Resort”, with its eleven luxury villas and nine heated pools overlooking the magnificent sunset in Delos.

The two-times World Champion and one of Formula 1’s highest-paid drivers, who is worth an estimated $220 million, is carefully studying his next step as he is in a very critical phase of his career. He is considered to be one of the top-ranked Grand Prix pilots after 32 wins during a career that began in 2001. It was he who overthrew Michael Schumacher from the top of the Formula 1 world, by winning two championships with Renault in 2005 and 2006. Today Fernando Alonso is looking for the next station in his career and an opportunity to regain his protagonist position.

He said “at 10am” and a minute before the clock showed 10 he appeared in front of us. With a nod we were asked to follow him inside the villa. It was impressively calm and relaxed. Although he has a reputation of being difficult as a character, he was a very hospitable host, immediately creating an atmosphere of intimacy.

As we walked further inside, we couldn’t fail to notice on a pair of boxed gloves on the floor, next to a pair of leather targets – accessories essential to the practice of boxing athletes and kick boxers.

With all the frenzy that prevailed in the wake of the big showdown, Conor Mcgregor vs Floyd Mayweather (it was Sunday morning), we had to ask the two-time F1 champion if he was particularly fond of boxing, sweat and blood in the ring. But Fernando replied: “They are not my gloves, they are my girlfriend’s. I just keep the targets and she punches as hard as she can.” and he added, “Linda does not joke when she is working-out”.

Who is Linda? A tall model from Italy, a black-haired “Aphrodite,” and according to gossip magazines, the former girlfriend of the nine-times MotoGP World Champion, Valentino Rossi, whom she had met when she was working as an umbrella girl in motorcycle racing. The sudden appearance of the beauty of Linda Morselli on the idyllic veranda of the villa, amidst the magnificent view of the sea, while we were being served fresh juices, causes small nervous movements. By acting somewhat impulsively and bypassing the savoir vivre of our meeting, I ask Alonso if Linda could also get into the photo frame. “Come on, if I ask her, it will make three hours to get ready. You understand how women think”, the champion replies, not letting the slightest room to deviate from what he had agreed on the day before. Fernando Alonso is a professional with the true meaning of the word, and one has to respect it completely.

“I fell in love with Greece”

Mykonos converted Fernando Alonso. As he told us, he could talk for hours of his new favorite, Greece, but also of last summer where he traveled to Milos and an island somewhere between Italy and Greece, whose name he couldn’t remember – though he did not want to forget the tastes and the beaches he visited by boat. “I fell in love with Greece,” confesses the Spanish star, stressing that “so I decided to come back this summer too. Discover other parts of this beautiful country. Ten days ago I arrived in Paros and now I came to Mykonos, which is famous all over the world.” He is impressed by the luxurious villas he chose for his stay, the “Agios Lazaros Resort”.

“Agios Lazaros Resort” is not considered to be a “VIP shelter”. It is located in the south-western part of Mykonos, in one of the most characteristic areas of the island and has a helipad, 24-hour security and full autonomy in power and water supply. It includes 11 villas, while in the same area there are two more villas belonging to a Greek shipowner.

In contrast, with his teammate, British Formula 1 pilot Lewis Hamilton, who has claimed his fame as a party animal and enraged at Mykonos nightlife during his visit a few weeks ago, Alonso preferred isolation. He came out of his villa a few times and only to dine in very carefully selected restaurants. Even his Instagram is full of photos of the resort where he stays. “I came here because I had to charge my batteries,” he says confesses. “I do not even want to go out, even if everyone is talking about the nightlife of the island. It does not fascinate me, I prefer more calm things. In Mykonos you can choose a quiet secret place and be in touch only with the sea and the beauties of the landscape. There is no reason to stay out all night”.

During his stay in Greece, Alonso learned the unpleasant news about the terrorist attack in Barcelona that killed 16 people. But he is not willing to discuss it. I ask him if he is impressed by the fact that, although he is on Greek soil, there are no visible signs of the economic crisis affecting the rest of the country: “When I go to a tourist destination, I know what I will meet. In places with such beautiful seas and so nice weather you do not understand what the crisis is. I hope that both Greece and Spain will be able to overcome their problems as soon as possible”, he says.

“I have not decided”

In his last and most recent interview with the CNN television network, Fernando Alonso declared he was determined to star in Formula 1 again. To the question of whether such a scenario is realistic, Alonso responded bluntly that if he did not see a team that will allow him to fight for victories, he will look for something other than Formula 1. In his exclusive interview at “Proto Thema”, Fernando Alonso appeared sparse as to his intentions about the next step in his career: “I have not decided yet what to do”, he says. “All I care about is to calm down and relax. It is good to shut off your switch for a while, discharge all the tension and then think about what you will do. We start in February with the winter tests, then follow the championship in March and until August you need to fly every two or three days and visit ten or eleven countries all over the globe. So when the time is right for you to decide for the future, you need to relax and think about what you really want”.

Formula 1 experts say the only option for Fernando Alonso at the moment is to return to Maranello and Ferrari. Where they loved him and glorified him as almost none of his predecessors, but also where he himself caused a great disappointment with his attitude. In spite of that, the Spaniard left Ferrari after five years and no world title (regardless of how close he got in 2010 and 2012) to return to a former “mistress”, McLaren.

One thing is certain: that in a sport where the armies of the highly trained and specialized technicians have the first say, the engineers think highly of Alonso, either in Renault, McLaren or Ferrari. These above all know that Fernando is a magician in setting up the car. What he asks for, what he observes, his tromendous perception and experience, but also his unique ability to give the maximum of his powers, perceiving as no one else the limits and the potentials or disadvantages of each single car are elements that make Alonso truly unique and rare. He probably has something like the 6th sense when he drives and unfortunately not when he makes career choices. Unless the Mykonos breeze proves to a fortunate one, and millions of fans, including many Greek fans, see Fernando Alonso winning titles again celebrating on the podium.