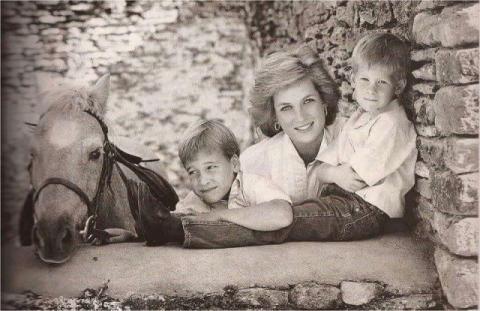 Tributes have been left at the gates of Kensington Palace, where thousands came to mourn the death of Princess Diana 20 years ago, Sky News writes.

On the 31 August 1997 it was announced that Diana, Princess of Wales had died after a car she was travelling in crashed in the Pont de l'Alma tunnel in Paris. She was just 36 years old.

To mark the 20th anniversary of her death people have stuck posters to the iconic gates of Kensington Palace, and left bunches of flowers to remember the Princess.

Photos from the time show how in the week following her death a sea of flowers were left in front of the gates of the palace as people travelled from across the country and around the world to pay their respects.

On Wednesday Prince William and Prince Harry visited the floral tributes, and took time to thank the crowds for their well wishes.

On Twitter, Kensington Palace wrote: "The Duke and Prince Harry are grateful for the many flowers, letters and messages they have received about their mother.

The two brothers and the Duchess of Cambridge also visited the White Garden that has been planted in Kensington palace gardens in memory of their mother and hosted representatives from half a dozen charities that she supported in the years before she died.

Crowds are expected to gather in Kensington Palace gardens.

Throughout the summer newspapers and magazines have run dozens of articles about every aspect of Diana's life, and television documentaries have also reflected on the circumstances surrounding her death and her legacy, a sign of the continued appetite to learn more about Diana, the wife, mother and international icon.

Maxim Behar Re-Elected as Member of BBLF Managing Board