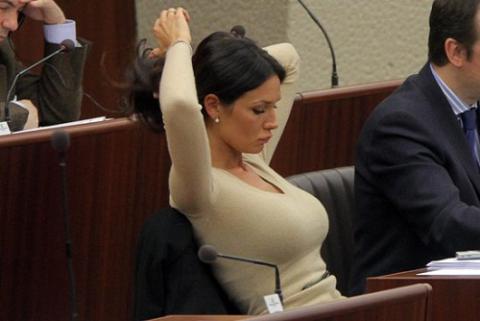 We have become accustomed to seeing female politicians taking centre stage in the world of politics. They are determined and decisive and display the character needed for leader. And when you combine those traits with beauty then a winning combination emerges. Here is a list of the sexiest female politicians from around the world. There is a Greek MEP in the list. She is a stunner.
10. Luciana Leon- Peru

This Peruvian politician was born on 30 June 1978 she is a daughter of very popular politician Romulo Leon Alegria. She has a masters degree of Governance and public policy from the University Of San Martin De Porres.
9. Maryam Nawaz – Pakistan

Pakistani politician Maryam Nawaz is the daughter of Pakistan’s Prime Minister Nawaz Sharif. She was born on October 28 1973 in Lahore. She entered in politics in 2012 and played an important role in the 2013 Pakistan general election campaign.

This beauty belongs to the Liberal Party of Canada and became the first Sikh woman to serve in the Canadian House of commons. She was born on 18 February 1974 in Winnipeg, Manitoba and attracted attention when she wrote a letter to the PM.

Orly Levy currently serves as a independent member of the Knesset after she resigned in 2016 from Yisrael Beiteinu party. She has four children and lives in Kibbutz Mesilot she was born in 1973.

The Lebanese politician and MP of the Bsharri District did her BS in Political science in 1994 and started her political career when she married politician Samir Geagea in 1991. She is a member of Lebanon Maronite league.

Eva Kaili is a member of European parliament and belongs to political party of Pasok (Panhellenic Socialist Movement). She is a former television news presenter. Born in 1978 she received her undergraduate degree in architecture and engineering from Aristotle university of Thessaloniki and her masters degree of Arts from university in 2014.

Italian politician Maria Carfagana is one of the hottest female politicians in the world. Born in 1975 in Salerno she has a degree in Law from the university of Salerno and entered politics after working in TV in 2004 joining the political party political party of Forza Italia. She also served as the Minister of Equal opportunity in the Berlusconi cabinet.
3. Yuri Fujikawa- Japan

Her father is a former member of the council of the city of Hachinohe. She is 33 years old beautiful politician and is also a councilwoman for Hachinohe city and belongs to the conservative party.
2. Alina Kabaeva- Russia

The Russian beauty is 33 years old and was a world class gymnast. In 2007 after retiring she entered into politics and was elected to the Russian Parliament in 2008.
1. Vanja Hadzovic – Serbia

This 27 year old politician had a role in the Serbian Foreign Ministry as an advisor. Following the revelations of some racy