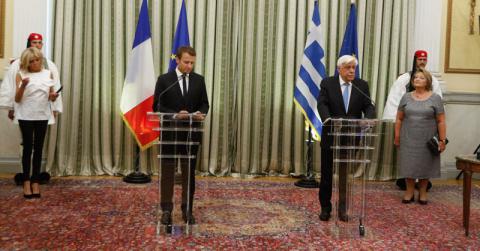 UPD-
The President of the Hellenic Republic, Prokopis Pavlopoulos received his French counterpart Emmanuel Macron and his wife Brigitte. Following the National athems of France and Greece, and the inspection of the honorary guard, the two Presidents accompanied by their spouses walked through the presidential palace garden before entering the Palace. In a joint press conference, Mr. Pavlopoulos said it would do what it had agreed on, adding that it expected the fulfillment by its partners regarding the sustainability of the Greek debt. “For us the rule Pacta sunt servanda (Latin for “agreements must be kept”) is sacred”, Mr. Pavlopoulos said, adding that he could fathom a future of the EU with Greece excluded. The Greek President thanked Mr. Macros for the support offered to Greece during the tenure of former-President Hollande. Mr. Pavlopoulos called for changes at an institutional level making reference to the EuroGroup as an unofficial body.

The French Presidential plane carrying Emmanuel Macron landed at Eleftherios Venizelos International airport in Athens 20 minutes earlier than scheduled at 12.37pm. Greek government spokesperson Dimitris Tzanakopoulos will greet the Presidential couple on the tarmac. According to the official programme, the French head of state will arrive at Eleftherios Venizelos International airport accompanied by his wife Brigitte at 1pm, where Greek government spokesperson Dimitris Tzanakopoulos will welcome the French delegation. The French President will lay a wreath at the tomb of the unknown soldier and then will visit the Greek Presidential Palace where the French first couple will be greeted by Greek President Prokopis Pavlopoulos and his wife Vlasia. Mr. Macron will be awarded with the Grand Cross of the Saviour. Mr. Macron is scheduled to meet with Greek PM Alexis Tsipras at Maximos Hall at 3.30pm, with the two men having a private meeting followed by a sit down between the French and Greek delegations at 4.15pm. The two leaders will hold a joint press conference at 5pm, while Mr. Macron is scheduled to deliver his key speech at the ancient Pnyx in Athens after 7pm. The official dinner is programmed for 9pm in honour of the French President. On Friday there will be a round table work meeting at 10am between Greek and French businessmen at the Stavros Niarchos Foundation in the presence of Mr. Tsipras and Mr. Macron, while the French President and his wife will visit the french Archaeological School at 11.45am.

Turkey to demand better protection for Turks in France