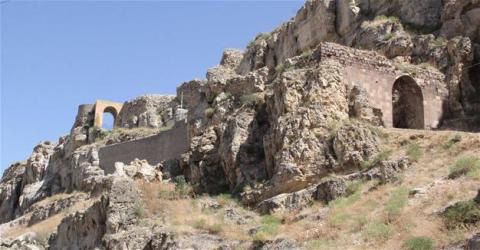 Guided by Evliya Çelebi's "Seyahatname" (Travel Book), an excavation team in the eastern province of Erzincan's Kemah district has succeeded to unearth the longest water tunnels and a millennium-old Turkish neighborhood.

Atatürk University history of arts department officials have been carrying out excavations in the Kemah Castle in Erzincan, which was the capital of the Mengücek beylik, for six years.

With contributions from the Culture and Tourism Ministry, archaeologists and art historians are working in the excavations and have so far unearthed significant artifacts.

The longest - 350 meters - historic water tunnels between Kemah neighborhood and Tanasur Stream and a 1,000-year-old Turkish neighborhood are among these artifacts.

The head of the history of arts department, Professor Hüseyin Yurttaş, said their guide is "Travel Book," written by Evliya Çelebi, one of the leading travelers of the 17th century who traveled the Ottoman lands for more than half a century.

Yurttaş said the multi-stage excavation works started in the field of a mosque, which is located in the entrance to the Kemah Castle and mentioned as a Bey Mosque in the travel book.

"In his book, Evliya Çelebi says that inside the castle are 600 houses and 11 houses of worship. Three of them have minarets and the others are like prayer rooms. The houses are adjacent to each other and most of them do not have a garden. The snow on top of the houses was thrown into the Tanasur Stream. We started working in light of this information and unearthed a nearly 1,000-year-old Turkish neighborhood," he said.

Yurttaş said excavations are continuing to uncover a bath in the castle and this year they cleaned some parts of the bath.