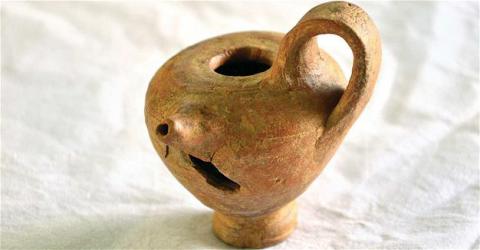 Excavations in one of the most important coastal towns of the Hellenistic era, the ancient city of Parion in the northwestern Turkish province of Çanakkale's Biga district, have unearthed a 2,000-year-old feeding bottle.

Hasan Kasapoğlu, a member of the Parion excavation team and associated professor in the Archaeology Department of Atatürk University, said the baby bottle is among the most significant findings in this year's excavations at the site.

The bottle found in a baby grave has single handle and pacifier in its mouth, Kasapoğlu added.

"The baby bottles from the Roman era were made of earthenware and were oven dried. We found a number of them in some baby graves in previous years. It is possible to see them especially in the early Roman era.

They were often left in baby graves as a gift to the dead," he said. Kasapoğlu said the baby bottles, which had a capacity of up to 100 millimeters, have various different models.

"The ones we have found so far are generally from the Roman era. They have a very small pacifier mouth. When the kiln was wet, they were given shape on a mold and dried," he added.