Cutest guests of the region of lakes 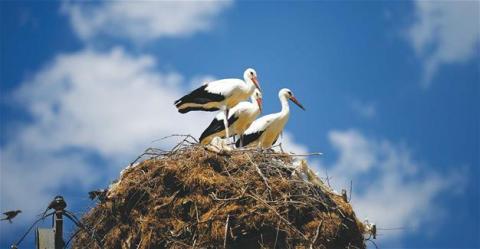 The storks, which are the subject of many stories, songs, poems and proverbs in Turkish culture, create colorful images during their migration to the Göller Yöresi (the region of lakes).

As the climate conditions in the region are harmonious with their lifestyle and have nutritious wetlands for wildlife animals, storks are seen in these fields during their migration period, adding visual richness to the region.

Storks come to the Göller Yöresi, which covers the southern provinces of Antalya, Isparta and Burdur, in spring and stay there until the end of the fall.

With an attempt to keep this beauty created by storks, Süleyman Demirel University (SDU) gives education on nature and storks to their students.

Ünal said storks migrate to other regions in summer months and enter the country from the south every year in mid-March. According to the professor, they find many fields in Turkey for feeding. "After entering our country, storks feed and incubate. In September, they return to the south, to Africa. The stork population is estimated to be nearly 700,000 in the world. The latest inventory shows Turkey is home to some 20,000 storks," he said.

Ünal said Turkey is in a significant location in terms of stork migration and the Istanbul Strait and Hatay Belen Pass are important migration routes.

He said storks mate every year in March. "During mating, they make a sound like 'lak lak,' especially the male ones. As a result, the female stork lays four eggs in a nest. Stork chicks begin to fly after two months," Ünal...

UK nominates movie on gender-based violence in Turkey for Oscars

Ghislaine Maxwell 'served up' girls for sex to Epstein: prosecutors