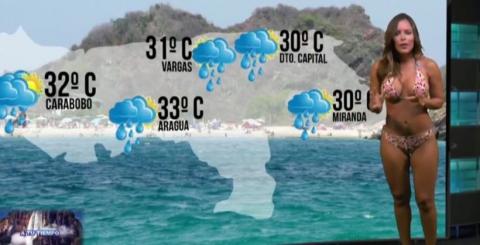 A weather girl who stripped down to a skimpy bikini to present the weather has won herself a legion of fans.
Lusmairyn Figuera has become something of a celebrity in Venezuela, where she presets the forecast for the Canal 24 channel.
Many of her admirers reportedly arrange their days so as not to miss the brunette’s daily show.
And she recently sent viewing figures through the roof when she told viewers how the day’s weather was shaping up while wearing a tiny flowery bikini and high heels.
Miss Figuera, who likes to play up to her popularity, previously read the weather while wearing her gym kit.
She has also performed exercises and even danced for her fans in the middle of previous forecasts.
Her looks – and willingness to appear on television scantily-clad – have attracted an army of more than 60,000 fans on social media. Miss Figuera is one of a number of weathergirls in Latin America to find fame for their looks, rather than the accuracy of their meteorology, such as Yanet Garcia in Mexico and Sol Perez in Argentina.

He Did Not Die, They Killed Him: Argentines Demand Justice for Diego Maradona

President calls for culture of dialogue on Culture Day