Auditor says he was forced to quit Vatican after finding irregularities 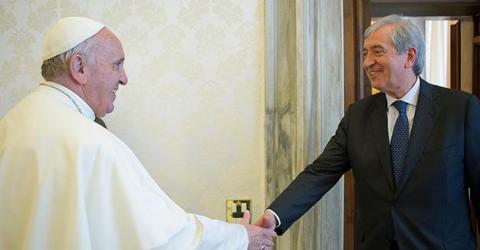 The Vatican's first auditor-general, who resigned without explanation in June, has broken his silence, saying he was forced to step down with trumped-up accusations after discovering evidence of possible illegal activity.

Speaking to reporters from four media organizations including Reuters in the office of his lawyers in Rome, Libero Milone also said he believed that some in the Vatican wanted to slow down Pope Francis's efforts at financial reform.

He said he could not give details of the irregularities he had found because of non-disclosure agreements.

Reuters was unable to independently verify his assertions, which the Vatican strongly contested.

The Holy See's deputy secretary of state, Archbishop Giovanni Angelo Becciu, told Reuters in an interview that Milone's claims were "false and unjustified."

"He went against all the rules and was spying on the private lives of his superiors and staff, including me," Becciu said.

"If he had not agreed to resign, we would have prosecuted him."

The 69-year-old left the Vatican two years after being hired with great fanfare to introduce more transparency into the sometimes murky finances at the headquarters of the Roman Catholic Church.

At the time of his resignation, with three years left on his contract, neither the Vatican nor Milone, formerly chairman and CEO of the global accounting firm Deloitte in Italy, gave any explanation for his departure. A Vatican statement at the time said only that it was "by mutual agreement."

Milone, who had also worked for the United Nations and the car giant Fiat, said Becciu had ordered him to resign on the morning of June 19. Milone was told that he was being dismissed on the basis of a seven-month...

Aegean scraps rebooking fees until March 20 due to coronavirus
President Iohannis: CSAT to hold meeting on Wednesday on coronavirus