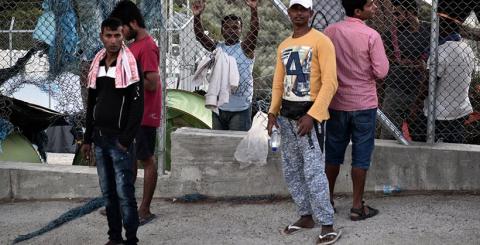 The online version of British newspaper Guardian publishes a piece titled “Surge in migration to Greece fuels misery in refugee camps” highlighting the increasing plight refugees and immigrants face in the Greek hotspots and registration centres as the numbers of people entering Greece rises. From the Guardian:

Greece is experiencing a dramatic rise in the number of refugees and migrants entering the country, exacerbating already deplorable living conditions on island camps.
The number of people arriving, across land and sea borders, has more than doubled since the beginning of the summer. Authorities estimate arrivals are now at their highest level since March 2016, with over 200 men, women and children being registered every day.
“It is dramatic and it is the most vulnerable of the vulnerable coming in,” said Elias Pavlopoulos, who heads Médecins sans Frontières in Greece. “There are whole families fleeing war zones in Syria and Iraq. In the last few months our clinics have seen more people who have suffered violence, who are victims of rape, who have been tortured, than ever before.”
Despite a pledge by EU member states in September 2015 to relocate 160,000 asylum seekers – including 106,000 from Greece and Italy – a mere 29,000 have been moved to other European countries so far. With the 28-nation bloc failing to meet the deadline set out in its own plan, mass demonstrations are expected in capitals across Europe this weekend.
Refugees and migrants have been arriving in Greece not only on rickety boats from Turkey but by foot across the frontier between the two countries. On Wednesday, police announced 37 refugees – including 19 children – from Iraq, Syria, Eritrea and Afghanistan, had been dumped by smugglers on the national highway outside Thessaloniki.
Human rights groups are increasingly likening the situation to 2015, when, at the height of the migrant crisis that engulfed Europe, Greece saw close to a million people enter the country on onward journeys that often took them to Germany.
“We’re living the days of 2015,” said Pantelis Dimitriou from Iliaktida, a local NGO on Lesbos operating accommodation and support centres for the newly arrived. “The flows have become huge. From around 50 to 60 in early July they are now at more than 200 every day. Maybe it is the German elections, maybe it is about Turkey’s [worsening] relations with the EU, or maybe this is the last push before winter, but something is going on.”