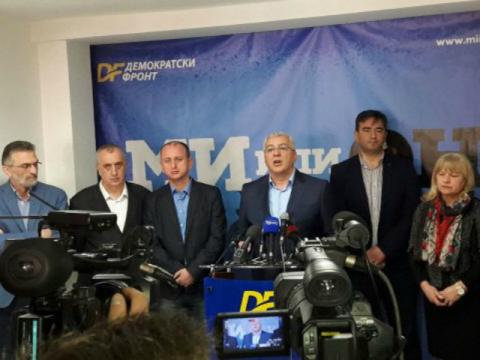 Montenegro opposition leader Milan Knezevic on Monday pleaded not guilty to charges of plotting a coup, and told the court in Podgorica that he was only there because he was a Serb who opposed Montenegro's membership of NATO.

Knezevic, one of the leaders of the strongest opposition alliance, the Democratic Front, is one of 14 Russian, Serbian and Montenegrin citizens facing trial for alleged involvement in a plot to overthrow the pro-Western government in October last year.

Knezevic appeared in court wearing Russian military symbols which he said he had received during a visit to Moscow at the ceremony marking Russian Victory Day in World War II.

Serbian politician Milan Stamatovic in Monday said that Montenegro's prosecutor was "brutally lying" when he said that agents of the Russian military intelligence, GRU, were planning the failed Montenegrin coup in Serbia's Zlatibor mountain, where Stamatovic is head of local government.

His reaction came one week after Montenegro's special prosecutor Milivoj Katnic said that a group of GRU agents was preparing the last year's failed October 16 coup on Zlatibor, without further explanation.

Stamatovic said in a press release on Monday that Serbia's ruling Progressive Party is leading an "anti-Serbian" policy by supporting the "dictatorship of NATO regime in Podgorica".

"Official Belgrade with Aleksandar Vucic at the helm supported and participated in Montenegrin President Milo Djukanovic's farce over the fake 'coup', by working against the interests of Russia, the only true friend of the Serbian nation," Stamatovic said.

Knezevic said he would only recognize "the court of the people and his party" and so would not answer questions from the special prosecutor Milivoje...