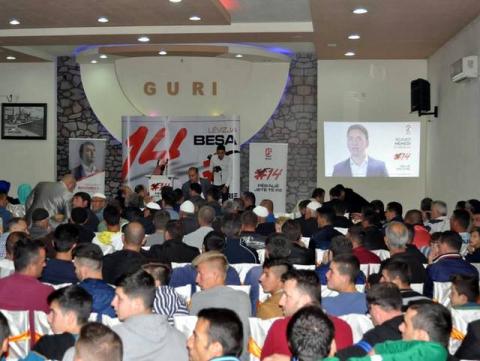 Macedonia's main ruling party, the Social Democrats, and the ethnic Albanian BESA party have exchanged a series of mutual accusations and warnings.

The dispute erupted after the Social Democrats, the SDSM, decided to openly support BESA's bitter Albanian rivals in the Democratic Union for Integration, DUI, in the October 15 local elections.

Relations dipped sharply after the Prime Minister and SDSM leader Zoran Zaev visited the Albanian bastion of Tetovo on Thursday, where he expressed support for the DUI's mayoral candidate.

During his visit, BESA activists staged a protest against what they call the unprincipled alliance between the SDSM and the DUI for the local elections.

In response, Zaev accused BESA of secretly "playing for the VMRO DPMNE team", referring to the former ruling party ousted from power in May.

"We are not playing for any team except for the interests of the Albanians as we are their strongest representatives. We advise Zaev to be more careful in future because he might lose Albanian support," a senior BESA representative told BIRN on Friday.

During the talks on the formation of Zaev's new government, which was elected in May, the SDSM turned to the DUI, which had 10 seats in parliament, and the role of kingmaker.

This was despite the fact that the DUI had participated for eight years in the former coalition government led by VMRO DPMNE, which was widely accused of authoritarianism and corruption.

Talks failed between the SDSM and BESA, which held five MPs' seats, despite many seeing them as more natural allies.

In the run-up to last year's general elections, they shared the same goal of ousting the VMRO DPMNE-led government from power.