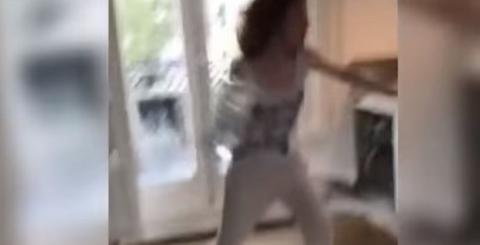 When you are in a relationship with a major ‘Game Of Thrones’ character, you should see it coming. In the show where severed heads and limbs fly off at the slightest pretext, it’s no surprise if the actors find themselves obsessed with a little gore. Kit Harington, who plays Jon Snow in ‘Game of Thrones’ and has already died once in the show, played a nasty ass prank on Rose Leslie, his Wilding girlfriend on-screen and his fiancée in real life.
Talking on the ‘Jonathan Ross Show’, Kit revealed the cruel April Fool’s Day prank he had played on Rose. He had placed a replica of his own head, severed and bloodied, in the fridge of their home. As an unsuspecting Rose opened the fridge door, she screamed in horror at the sight of the head.
You may have acted in a show full of blood and violence, but nothing prepares you well enough for the sight of your boyfriend’s bloody head in your fridge. Rose nearly faints with the shock and collapses on the floor in the video.
Kit reveals, ‘It didn’t go down well. She pretty much told me if I did it ever again that would be it – and I think that’s marriage included.” Of course, it would be it. That’s too much of GOT for a lifetime, Jon Snow.