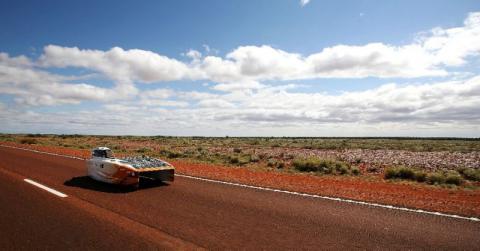 The World Solar Challenge, first run in 1987 and last held in 2015, began in the northern city of Darwin on Sunday morning with 41 competing cars, with Adelaide in South Australia state the final destination.

Cheers and chants of “Nuna” roared from the large Dutch contingent as the “Nuna 9″ car — travelling at an average speed of 81.2 kilometres per hour (55.5 mph) — crossed the finish line mid-afternoon.

The US’ University of Michigan “Novum” was on track for second place ahead of Belgium’s Punch Powertrain.

The event has become one of the world’s foremost innovation challenges with teams looking to demonstrate designs that could one day lead to commercially available solar-powered vehicles for passengers.

The win is the seventh for Nuon, with their car overcoming cloudy skies as they took the lead early and stayed ahead in the elite Challenger class, which features slick, single seat aerodynamic vehicles built for sustained endurance and total energy efficiency.

Team manager Sander Koot said they changed their strategy and driving style to cope with weather conditions that included wind gusts of up to 60 kmh.

They also positioned the car so it could benefit from the windy conditions like a sailing ship, the team’s aerodynamics expert Jasper Hemmes told organisers.

There is also a Cruiser class which aims to showcase solar technology for mainstream vehicles that are more practical for day-to-day use.

Another Dutch team, Eindhoven, is on track to finish Friday and win that class, with Germany’s HS Bochum tracking second.

The vehicles are powered by the sun and mostly developed by universities or corporations, with teams hailing from Australia and across the world including the United States, Malaysia, India and South Africa.

They are allowed to store a small amount of energy but the majority of their power has to come from the sun and their vehicle’s kinetic forces.

The crews drove between 8am and 5pm each day with seven checkpoints along a route cutting through the heart of Australia’s central desert region, to get updates on their standings, the weather, and do basic maintenance.