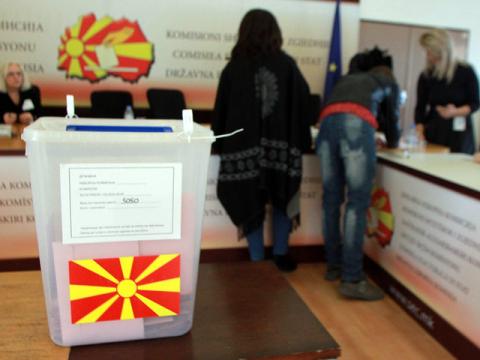 A total of 3,480 polling stations opened at 7am on Sunday for Macedonia's local elections, in which some 1.8 million voters will have the right to choose mayors and local councils in 80 municipalities plus the capital, Skopje.

Voters will choose between a total of 260 mayoral candidates for the 81 municipalities until 7pm Sunday, when polling stations close.

The main contestants in the elections are the ruling Social Democrats, SDSM, led by Prime Minister Zoran Zaev, and the opposition right-wing VMRO DPMNE party, which was ousted in May after 11 years in power.

In mainly ethnic Albanian-dominated municipalities, concentrated in north-west Macedonia, the main battle is being fought between the junior ruling party, the Democratic Union for Integration, DUI, and several smaller Albanian rivals, like the BESA movement and the Alliance for Albanians, who seek to end the DUI's long dominance of the Albanian community.

The vote comes after a two-and-a-half-year-long political crisis, which only ended in May with the election of a new SDSM-led government.

The local election results, therefore, are a matter of high stakes both for the new ruling party and the opposition VMRO DPMNE.

The elections will be seen as an important test of the popularity of the new reformist pro-EU and pro-NATO government.

Under the slogan "Life for All in Macedonia", the SDSM has focused its campaign on promoting measures to curb high pollution levels in the country, stopping unchecked construction, greater de-centralisation and allocating more equal funds for proper urban and rural development.

The SDSM has also emphasised its renewed efforts to relaunch Macedonia's...

As of Today, New Rules for Entering Bulgaria Come into Force