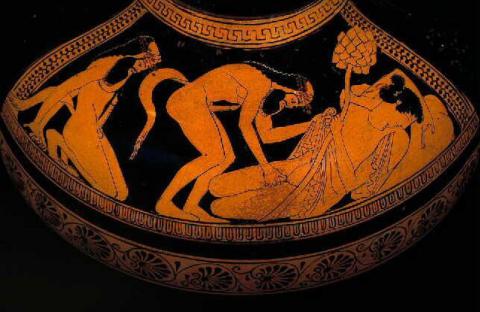 According to Aristophanes, human beings used to have four arms, four legs, and two sets of genitals, either two male sets, or two female, or one of each. But Zeus split everyone in two, forcing them to wander around on just two legs looking for their other half, with their sexual orientation determined by the genitals of that alter egothey yearned for. Sex hasn’t changed much; we are still on that same quest, and many of the sexual attitudes from two and a half thousand years ago are still around today – but there are also some radical differences.
Many Greek philosophers were lukewarm on the subject of sex. Democritus thought that people derive as much pleasure from scratching themselves as they do from having sex. Aristotle asked “Why are people ashamed to admit that they want to have sexual intercourse, whereas this is not the case with drinking or eating or other such things? Is it because most of our desires are for things we must have, some of them actually being essential for life, whereas sexual desire is a non-vital indulgence? (Ps.-Aristotle, Problems). Epicurus (yes, that Epicurus, the one who regarded pleasure as life’s central purpose) said that “sexual intercourse has never done anyone any good, and we should be content if it does us no actual harm” (Epicurus, frg. 62).
On the other hand, Greek physicians took a much more positive view. They recommended intercourse as a way of countering a wide spectrum of ailments: depression, indigestion, jaundice, lower back pain, weak eyes, and many more. Hippocrates, the father of Western medicine, states that unrestrained intercourse cures dysentery. Sex gives relief to a man bitten by a snake or stung by a scorpion, although it harms the woman who is his partner. It can even restore sanity.
Ancient Greek medical texts also provide many remedies for male impotence: for example, smearing your penis with a mixture of pepper, olive oil, and honey. If you want to make your penis look especially big, soak the root of a specific but unidentifiable plant in good wine for three days and, when needed, tie it to your thigh. Aristotle thought size mattered, but not how you might think: the longer a man’s penis, the farther his semen has to travel and the greater the chance that he will be unable to father children.
The images that follow present just a few of these sexual curiosities in Ancient Greece – sometimes satirical, sometimes familiar, and often strange.

2 Carrying a Phallus
There is no ambiguity about this woman’s status: she is a prostitute.

3 A Winged Phallus
This recreation of an ancient graffito depicts one of the metal winged phalluses, often embellished with their own phallus and an eye on the tip, that were hung up in many public and private places to ward off evil.

4 An Unusual Perch
Stone blocks called Herms, portraying a bearded head and an erect penis, were set up at street-corners and other public places to ensure divine protection for the city.

5 Making an Offer
This image, which appears on a coin, depicts a satyr, a mythological half-man half-goat who was short on looks but long on lust.

6 FOLLOW ME
A terracotta model of a sandal with the word AKOLOUTHI (“follow [me]”) elaborately picked out in the nails on the sole.

7 Paying for Sex
The words [H]O PAIS KALOS, as seen in small lettering across the top of this image, mean “The boy [is] handsome.”