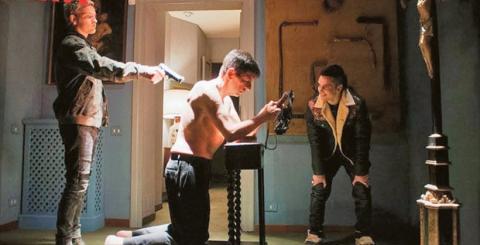 When journalism lacks a modicum of common sense, and fails miserably to do the most basic of research then the outcome is bound to be disastrous and in some cases quite damaging for the reputation of people. Last week we had reported about an international TV series focusing on the sex scandals and corruption revealed in the Catholic Church and the Vatican called “Subbura”, which was to air of Netflix every week. One of the protagonists in the series, which had already received great reviews around the globe, was Greek actor Gerasimos Skiadaresis, who played the role of Cardinal Theodosius, the corrupt head of finances of the Holy See in Rome. The actor was seen in the series trailer taking part in explicit sex scenes and orgies with young girls, while in other scenes he was seen performing self-flagellation and taking drugs. It appears these scenes were “mistaken” by some publications as being real life (!!), and they proceeded to accuse the actor of debauchery, splashing the images on their front pages! The Greek actor was forced to set the record straight in a Facebook post expressing his outrage and surprise at the coverage of some publications accusing the magazines of being dishonest and going so far as involving the name of his wife in their articles!