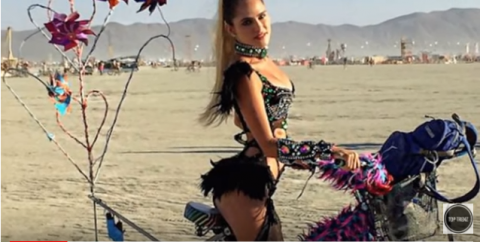 Every year people from around the globe rush to a majestic place full of creativity and beauty called Burning Man. One of the roots of the annual event now known as Burning Man began as a bonfire ritual on the summer solstice in 1986 when Larry Harvey, Jerry James, and a few friends met on Baker Beach in San Francisco and burned a 2.7-meter wooden man as well as a smaller wooden dog.

This year the gathering took place between August 27 – September 4, in the Black Rock Desert of Nevada. Burning Man isn’t just an ordinary festival. It’s a special city created by its own citizens. It’s the only place where all of your deepest and darkest dreams may turn into reality. Participants experience unbelievable emotions. One of the things it has become famous for over the year is the hot babes that gather there. Check out the gallery of these sexy women at Burning Man who stole our heart. After seeing these captivating shots you’ll need no more reasons to visit this mind-blowing event.