Teen auctions off virginity for iPhone, but falls victim to prank! (video) 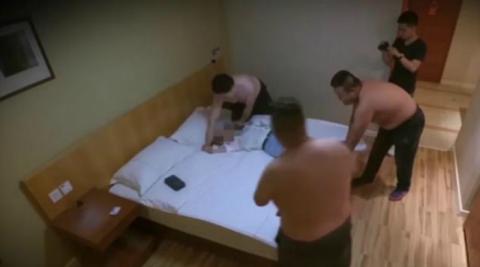 A teenage girl who claimed to be auctioning off her virginity in return for an iPhone 8 was taught a terrifying lesson.
The 17-year-old is reported to have posted her ‘offer’ in an online forum, where she said she would give up her virginity for a cash payment of around £2,300.

But her post was discovered by a vlogger who hosts a show, and they set up an interview with the unsuspecting teen, known as Xiao Chen.
Footage posted by vlogger Nana, 21, shows the pair meeting in a tea house, where Xiao Chen explains that one of her friends slept with a wealthy stranger and earned “easy” money.
The girls claims she wants to order to buy the new iPhone 8 – which all her friends have – although several people have said the footage is fake.
Nana, whose show focuses on exposing poor social behaviour and challenging the human condition, tries subtly to talk the teen out of the deal, but Xiao Chen insists.
“All I have to do is lie there, right?” she says during the interview, adding: “We each get what we want. I’ve already thought it through.”
Nana then gives the girl around £60 as a “deposit” and the pair set up a time and place for the deal to take place, but the teenager has no idea that she is about to be set up for a very public shaming.
The show’s climax happens with Xiao Chen inside the hotel room with her client, who hands her a new iPhone 8 to gain her trust.
But things go frighteningly wrong for Xiao Chen when three more men – one with a camera – enter the room and the trio say they want to “have some fun”.
The teen is pinned to the bed- and then Nana bursts out from the hotel room bathroom to stop the staged scene.
“Now are you afraid?” Nana screams at Xiao Chen, who sits crying on the bed.
“Well, it’s too late now!” the vlogger adds, saying: “It’s not worth selling anything just for a phone.”
In the end, Nana orders all the men, including the cameraman, out of the hotel room so she can lecture the teenager in private.