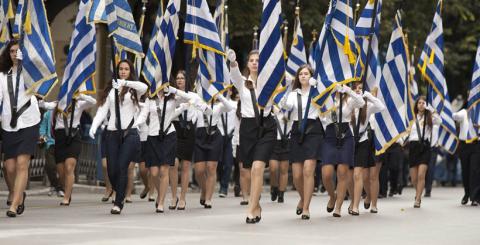 “Ochi Day”, the Greek National Holiday commemorating dictator Ioannis Metaxas’s rejecting the Italian ultimatum for a right of passage through Greece on October 28, 1940, is typically celebrated with student parades throughout Greece, as well as military parades. Traffic blocks have been placed in Thessaloniki cities from early on Friday morning with a steady ban to traffic from 10 a.m, when student delegations are scheduled to lay wreaths at the 3rd Army Corps, with the students’ parade to be held in the presence of members of the Government and other authorities at 11 a.m. on Tsimiski street. The start of the parade will be from Diagonio and the end at Ioannis Dragoumi street.
Schools designated by the Directorate of Primary and Secondary Education of Eastern Thessaloniki, as well as the flag-bearers of schools from the Secondary Education of the Municipality of Thessaloniki will take part in the parade.