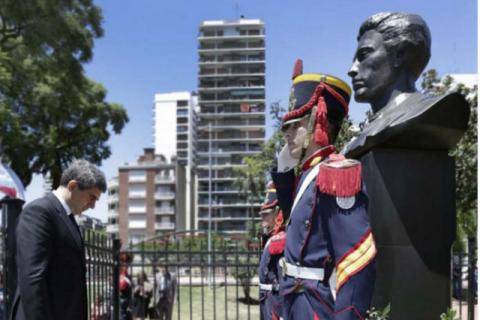 Bulgarians gathered in front of the Bulgarian Orthodox Church of Saint Dimiter in the city of Brampton, Ontario, on Sunday to celebrate the unveiling of a monument to Bulgaria's most beloved national hero Vasil Levski, the first erected in Canada.

It took only six months for a group of enthusiastic Bulgarian emigrants, diplomats and religious figures, to realize the idea for the monument, initially launched by Bulgaria's honorary consul to Toronto, Petar Kraychev.

"Levski is not just a symbol of what we can achieve when we are together, but of the virtues which make us Bulgarians," Kraychev told the group attending the inauguration.

He said the statue of the iconic revolutionary had been created by Bulgarian authors relying on private donations.

On July 18, Bulgaria marked the 180th anniversary of the birth of Vasil Ivanov Kunchev, known as Vasil Levski, or "the Apostle of Freedom".

A former Orthodox monk and teacher, Levski was a key strategist of the revolutionary movement for the liberation of Bulgaria from Ottoman rule in the 19th century.

Having lived as an emigrant among Bulgarian revolutionaries in Serbia and Romania, he returned to Bulgaria in 1870 to establish the International Revolutionary Organization - an innovative illegal network of revolutionary committees throughout the country.

His activism was based on the idea of creation of a "pure and sacred" Bulgarian republic, based on ethnic and religious equality, in line with the liberal ideas of the French Revolution.

His dedication to the liberation movement and his tragic death established Levski as an iconic figure in Bulgaria's history and as an all...