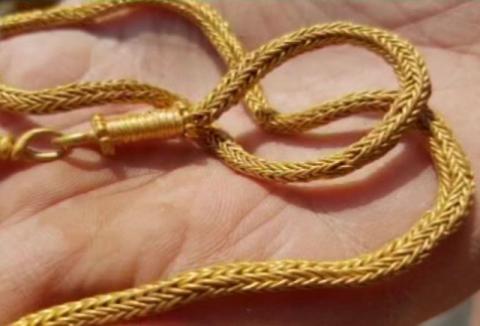 A sophisticated Ancient Roman gold necklace from the 4th century AD has been discovered by a team of archaeologists excavating the Ancient Thracian, Greek, and Roman city of Heraclea Sintica, the ruins are located near the town of Petrich in Southwest Bulgaria.

Heraclea Sintica is thought to have been founded around 300 BC by Cassander, King of the Kingdom of Macedon in 305-297 BC, who also founded Thessaloniki, nowadays in Greece.

The city was named "Heraclea" after the mythical Ancient Greek hero Heracles, more popularly known today as Hercules, and "Sintica" after the Thracian tribe of the Sintians who inhabited the valley of the Struma River.

Since 2007, the ancient city has been excavated by a team led by Ass. Prof. Lyudmil Vagalinski, Director of Bulgaria's National Institute and Museum of Archaeology of the Bulgarian Academy of Sciences, and Sotir Ivanov, Director of the Petrich Museum of History.

The newly discovered Ancient Roman gold necklace, which is over 1,600 years old, has been found amid the ruins of what was a shop at the city's central square, which was later used as a home.

The discovery has been completely unexpected for the archaeological team because precious metal objects like his one are usually discovered in necropolises or in graves of prominent people, rather than inside cities.

Read the rest of this article here

*This article has been provided by ArchaeologyinBulgaria.com.