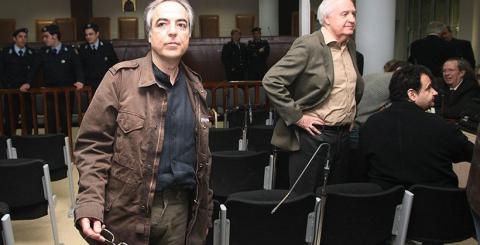 The decision by the board of the maximum security prison Korydalos to grant a 2-day leave to Dimitris Koufontinas, one of the key figures of the notorious extreme left terrorist group “November 17”, which was responsible for a string of high profile assassinations of politicians, diplomatic attaches and businessmen, has caused a political firestorm with the leader of major opposition party New Democracy (ND), Kyriakos Mitostakis dubbing it |inconceivable”.

The decision comes only a few days after the headquarters of minor opposition socialist party PASOK came under attack with a Kalashnikov machine gun by a what police believe to be a group known as “Revolutionary Self-Defence”. Political analysts and pundits believe the decision is a distraction tactic by the government to divert public attention from ongoing issues, like the first home foreclosures, prison paroles under the Paraskevopoulos law, pension cuts etc). Dimitris Koufontinas, who is serving life in prison after giving himself up to police in September 2002, is expected to take his 2-day leave from the Korydallos prison in the morning today. ND MP and sister of leader Kyriakos, Dora Bakoyannis, whose first husband Pavlos Bakoyannis, and ND MP, was murdered by the terrorist group in 1989, expressed her surprise with the leave, saying in a radio interview that it was “inconceivable for the main shooter of November 17 to be out free”.

Dimitris Kammenos an MP from the right-wing ANEL party, the minor government coalition partner said Koufontinas should not have been issued a leave.

ND MEP Eliza Vozemberg tweeted that a remorseless murderer should not be out of prison, while ND MP Makis Voridis also echoed the sentiment of his colleagues calling the decision inconceivable.

Another ND MP, Adonis Georgiadis, tweeted the decision was not worthy of any comment, calling it a provocation. Athens Mayor Dimitris Kaminis also commented saying that people like Koufontinas should not be let of prison, while communist party (KKE) MP Liana Kanelli labelled the decision a calculated provocation, speaking to radio Action24.

Meanwhile, Hector Koufontinas, the son of the convicted terrorist, posted on Facebook saying that his father’s leave was in accordance with the law.