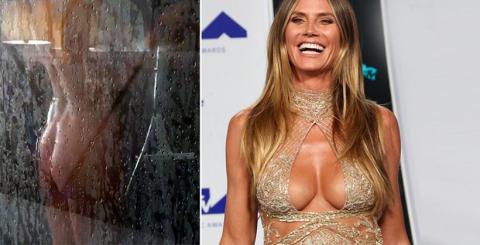 She’s flaunted her body on and off the runway for decades.
And Heidi Klum gave fans an even more revealing look at her stunning figure as she posted a naked shower video on her Instagram story Friday afternoon.
The 44-year-old model showed off her slender form behind a steamy glass door while wearing nothing.
With loud music playing in the background of the short clip, Heidi can be seen dancing around a massive shower.
While her face may be hidden from view, her tanned and toned bum is on full display for fans to see.
The supermodel took a moment from dancing to draw a heart shape on the glass of the shower door.
Away from the cameras, Heidi is currently single, following her recent split from toyboy lover Vito Schnabel.
She parted ways with the 31-year-old art dealer in September after three years together and told People magazine: ‘I believe that it is important to take time to pause and reflect.’
Meanwhile, Heidi previously revealed she still has a good relationship with her ex-husband Seal who she was married to from 2005-2014.