Fears of possible terrotist attack in wake of November 17 celebrations 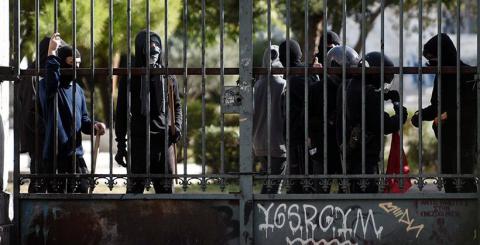 The Greek state has deployed 7,000 police officers in the wake celebrations and events for the 44th anniversary of the Polytechnic uprising in 1974. The events have not commenced yet, but the government fears that the current climate with anarchists, both domestic and “imported” (mainly from France) occupying the school’s yard and calling for citizens to rise up with leaflets could lead to widespread chaos. Officers of the law have taken up positions on streets and footpaths to prevent any possible outbreaks of violence by anarchists around the Polytechnic school, while the anti-terrorist unit has is also involved in the measures, as there are concerns of a possible terrorist attack. Police sources say that the situation is the most dangerous in recent years, as the atmosphere is especially tense following the arrest of 29-year-old Konstaninos G. at Attica square and the recent armed attacks against the PASOK headquarters, as well as the political feud over the prison leave of jailed terrorist of November 17, Dimitris Koufontinas.