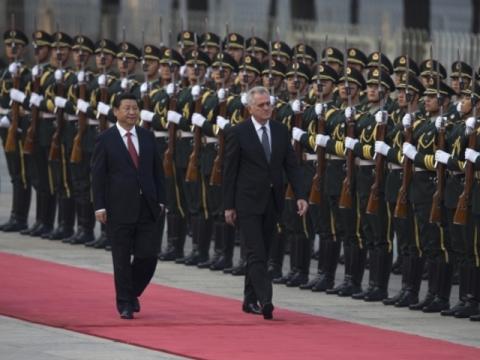 Serbia's National Council for Cooperation with Russia and China and the Chinese ambassador in Belgrade, Li Manchang, have pledged to support the establishment of a Chinese-Serbian association of companies.

However, many experts doubt that Serbia stands to gain much from it, unless the country greatly increases its volume of exports.

"There will be no benefit for Serbia until we find a way to increase our exports to China. This is not an issue of good will; it's whether you have something to offer," Milan Culibrk, economic analyst and editor-in-chief of the weekly NIN magazine, said.

"This [proposal] made me laugh a little bit," said foreign investment consultant Milan Kovacevic, who scoffs at the National Council as an institution created for Serbia's retired former President, Tomislav Nikolic.

The Council was created after the presidential elections in April 2017, in which Prime Minister Aleksandar Vucic stood as the Progressive Party's candidate, replacing Nikolic.

At first threatening to run for President independently, Nikolic buckled after negotiations with Vucic. After Vucic's victory in the elections, the National Council for Cooperation with Russia and China was formed in May, with Nikolic at its helm.

"It is completely unclear to me what the purpose of Nikolic's institution is. I only see that they created [it] to appease him," Kovacevic told BIRN, also questioning Nikolic's qualifications for the job.

However, China's ambassador Li told Nikolic at a meeting last Thursday that Chinese companies are interested in forming a joint association. Kovacevic, however, says this is just a payoff to Serbia for being "of perfect use" to China.

"We are the first country that accepts all of [China's] perfect ideas -...

Turkey to progress on vaccine development

Latest on the coronavirus: Experts say virus could kill up to 240,000 Americans