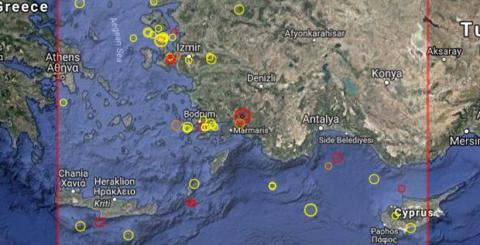 A 5.0 magnitude on the Richter scale was recorded in the southwest of Turkey, 31km southeast of Mugla, the USGS said.
The earthquake occurred at 20:02 (GMT) – 22:02 (Greece time) at a depth of 10 kilometres, according to the Institute
The earthquake was felt in Rhodes, causing concern to the inhabitants of the islands of the Dodecanese.
The Euro-Mediterranean Seismic Centre registered the tremor at 4.9 on the Richter scale. Earlier (9pm Greet time) a 3.5 tremor had hit the city of Thessaloniki in Macedonia.